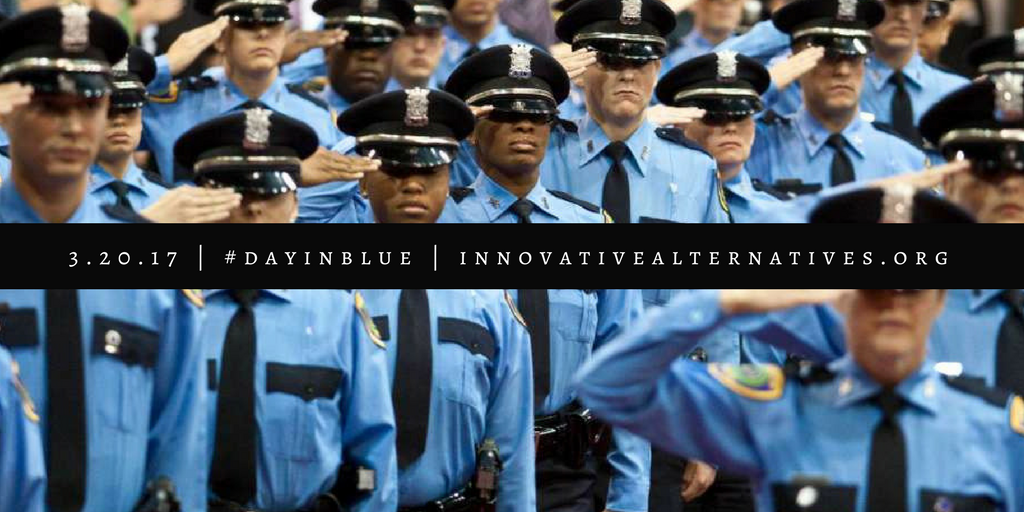 IA’s #dayinblue is the Monday after St. Paddy’s on March 20th

Show your support for all law enforcement officers and the crime victims they help.

Crime victims like Helena, the nine-year-old daughter of one of HPD’s finest, and sexual abuse victim. Through courageous work in play therapy, at Innovative Alternatives, Helena quite literally found her voice as her counselor suggested to her parents that they give her a creative outlet in singing lessons since she was responding so well to music and play therapy. She is our Legacy of Leadership Honoree. Helena moved from being a victim to a survivor of sexual abuse to singing off-Broadway and around the country. She is writing a children’s book to encourage other boys and girls to ‘Tell & Keep Telling’ and wants to begin doing public speaking in schools. At this young age, she has already composed a song to help other sexual abuse victims. This young girl is doing more in her nine short years of life to impact others than some adults do in a lifetime!

Helena’s triumph over tragedy is why she is this year’s Legacy of Leadership honoree. This police officer’s daughter will receive our highest honor during an award ceremony at the Legacy of Leadership Golf Classic hosted at Bay Oaks Country Club, on Monday, March 27th, following a Golf tournament, networking cocktail hour, helicopter ball drop, silent & live auction, and dinner. Dinner generously provided by our sponsor, Jay Bayala of Longhorn Steakhouse in Webster.

Law enforcement officers receive their 4th golfer free after applying a special discount code here: birdeasepro.com/ia. We appreciate everything our officers do for the community!

To receive the Law Enforcement Officer discount– email iai@innovativealternatives.org to get your code.

Helena may not have received the intervention she needed that led to her incredible journey of healing, had Innovative Alternative’s Crime Victim’s Assistance Program not been available to her.

The Legacy of Leadership Golf Classic directly supports the Victim Assistance Program of IA, which provides free counseling and related assistance to crime victims from children to the elderly, the most vulnerable among us. It does not matter when the crime occurred or if it was reported, and most of the 3,300 victims we serve annually are violent crime victims. IA must raise an annual local match of $183,500 to keep the $730,400 coming from the Governor’s Office of the State of Texas, Criminal Justice Division.

Give a Gift of Hope!

March 20th is a special day for IA and our sponsors & community partners as we start a new tradition: #DayinBlue

Our staff, clients, and partners are encouraged to wear blue on march 20th to take a stand and #BacktheBlue… this follows the tradition of wearing green on St. Patty’s Day – we will wear blue in honor of you, the real hero’s in our community! Supporters are encouraged to post photos using the hashtag #DayinBlue to all social media channels.