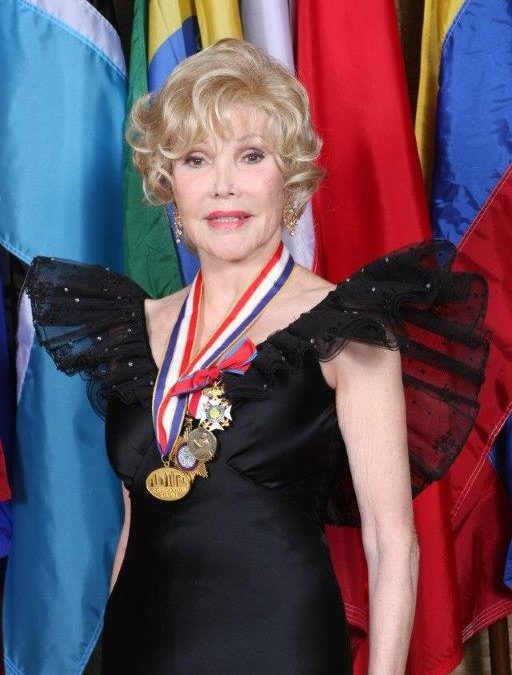 Innovative Alternatives is proud to honor the h Joanne King Herring at the upcoming Legacy of Leadership 30th Anniversary Gala on February 22, 2019, in the Hilton Hotel’s Grand Ballroom at the prestigious University of Houston.

The Dame, The Knight, The Ambassador, Hostess Author, Texas Hall of Fame, and now Nominated for the Congressional Gold Medal (civilian equivalent of Congressional Medal of Honor).

Joanne and Charlie Wilson played a critical role in ending the Soviet Union’s invasion of Afghanistan without the loss of one American life. Their efforts were the leading factor that aided Pres. George W. Bush and Secretary James Baker in the collapse of the greatest War machine in history, the Soviet Union. This action helped to end the cold war and many say prevented World War Three.

Superstar Julia Roberts played her in the movie Charlie Wilson’s War with 5 Academy Award Winners in the cast.

Her biography Diplomacy and Diamonds made five best seller lists.

She has served as Council General and Advisor to the President of Pakistan and the King of Morocco simultaneously.  The only woman in history to be a double consul.  She has been lauded by the press in England, France, and Germany. Spain, Pakistan, Morocco and entertained their Presidents and Kings on their state visits to the United States.

The Joanne King show was on the air 15 years and was rated the 5th most popular TV daytime show in the United States.

Not one to rest on her laurels after helping defeat the Soviet Union in Afghanistan, Joanne was disheartened to see the villages there struggling, and people vulnerable to the reemergence of the Taliban and their poppy fields, among other hardships and brutalities.   Ten years ago, she founded a charitable organization, Marshall Plan Charities (MPC), with the mission of building a model village in Afghanistan that was founded with the simultaneous introduction of modern schools, basic health care, clean water, sustainable food sources and real jobs.  The dream of this successful, thriving village was realized in Khair Abad in the Shindand District of Herat Province in western Afghanistan.  Now, ten years later, not only is Khair Abad a thriving success, it is now the capital of its province.

Innovative Alternatives is proud to honor Joanne King Herring who so clearly champions causes so near to what we do every day helping crime victims and their families begin to put their lives back together.

To join us in celebrating all of 2019 Visionary Leaders Award Winners visit: https://birdeasepro.com/event/register/10355/